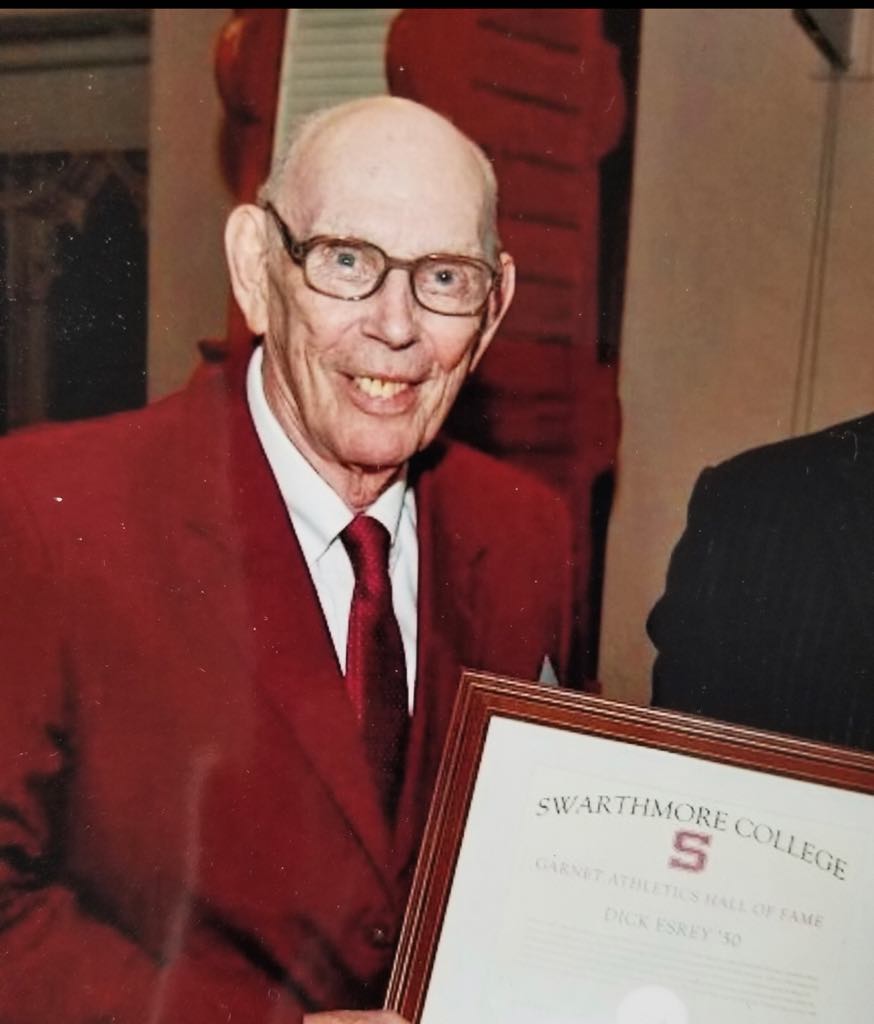 WALL, NJ--Richard Alexander Esrey, age 91, passed away peacefully from natural causes on March 15th, 2020 at Brandywine Senior Living Center in Wall, NJ. Born in Brookline, Pennsylvania Richard (Dick) attended Haverford School, in Haverford, PA and graduated with a Bachelor's Degree from Swarthmore College in 1950. Upon graduation he married Anne Moister and took a job with Ohio Bell. They raised 3 children, 2 boys Todd and Steve, and daughter Dianne. He transferred to AT&T in NYC and moved to NJ in 1964. At retirement in 1986 Dick was managing the North American Network in the US and Canada that served both voice and data traffic. Highlights included chairing the task force that developed and introduced “1-800” services to the communications industry still used today. His lifelong passion and enthusiasm for sports allowed him to serve and volunteer in many aspects of athletics. This included officiating in the Eastern Association of Intercollegiate Football, coaching little league baseball in Madison, serving as president of the NJ State Men's Tennis League, and serving as executive secretary of the NJ Men’s Platform Tennis Association. He won numerous local and club tournaments, and served as President of Noe Pond Club in Chatham. He also assisted as a tennis coach at Drew University. In 1986 his beloved wife Anne passed away. He relocated to Sarasota, Florida in 1990 where he and his companion Marguerite Deacon enjoyed his retirement and he served as Club President to his homeowners association of the Sanderling Club. He enjoyed playing tennis and many visits from his family and friends. In 2007 Dick returned to NJ where he resided at Princeton Windrows in Princeton. There he served on the ad hoc committee, buildings and roads, then later on the board of directors. In 2012 Dick was honored to be inducted into Swarthmore College’s Inaugural Athletics Hall of Fame as a three sport star athlete in football, basketball, and baseball where he earned a pair of football All-American honors. He was predeceased by his parents Alexander and Dorothy, wife Anne, son Steven, and brother Jack. He is survived by 2 brothers William and Robert and survived by his son, Richard A Esrey Jr. of Leesburg, Florida and his daughter Mrs Dianne Palumbo of Wall, NJ. Treasured are his 5 grandchildren, 4 great grandchildren, in addition to in-laws, nieces, nephews, and a host of long time friends. The family would like to thank all those who took such loving care of Dick in his final days at Brandywine in Wall. In lieu of flowers we ask that everyone stay safe and perform an act of kindness for someone in need.